What's cool about it?

It always starts with the same story of “do you remember the hologram from Star Wars?” This concept of Holograms has been what feels like the next step forward in the world of augmented reality as it requires no headsets or goggles and what one person sees everyone will also be able to see but from different angles. Now there is a small difference between Volumetric Displays and the standard preconception of Holograms, as Volumetric Displays physically recreate an image in 3D space while Hologram technology creates 3D images by sending light through a 2D screen that contains a diffraction grating which means that the image has the illusion of depth but not actually so as the angle of viewing is limited [1]. In other terms what one person would see would differ from what another sees from a different angle on the same object. There is a company named the Looking Glass Factory and they created the world’s first desktop holographic display and the best part its affordably priced. Here is an example video showing the technology in action:

As of now the Looking Glass display has a clear visual acuity. How it does this is 45 views are encoded into a video signal that is sent to the Looking Glass. The display’s optics decode the video signal into a full-color, super stereoscopic 3D scene.[2] Imagine a microcosm living inside this small display that can create vivid 3D images in real space, almost like magic, but the magic is actually science.

Then there's are alternatives like a company named Voxon Photonics that has a working version that uses a Volumetric Display that can fairly accurately display a 3D image with the use of a Display and occasionally an enclosure around the display area. These solutions are far less financially friendly but still visually impressive.

And finally, researchers from Brigham Young University have also created a freestanding version that people can physically interfere with the image and have it appear like the image has been placed on the tip of their finger. Albeit at a much smaller scale due to the nature of the particle manipulations happening:

We will be focusing on the Looking Glass for this presentation as there are more in the field examples than the other two Volumetric Display providers. 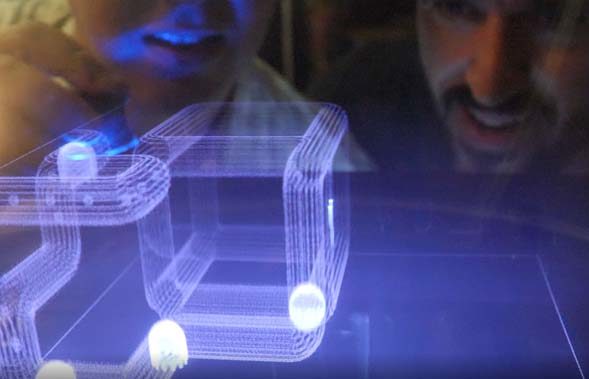 An entire biome existing on someone’s desk, simulated and displayed through this technology would make for an interesting paperweight, but why is it a good use of VR/AR? It is a good use of AR as it can use light to create a 3D image with depth that can be interacted with. This requires no headsets or extra peripherals and many people can look at a 3D image from many viewing angles at the same time without loss of image quality. And despite all the wondrous things possible with VR and AR, they are ultimately isolating experiences, and somewhat disconnecting.[3] This is also the closest we have come to recreating many of science fictions many wonders that have been demonstrated over the years including the famous Star Wars scene. Now with the Looking glass, creating 3D visuals is much easier when they are right in front of you, not being rendered by a 2D computer screen but a 3D Volumetric Display. Small games could even be played due to how interactive the 3D images could be made. As Voxon has a game cabinet that small apps can be played on and Looking Glass has a motion controller to interact with the currently displayed image. 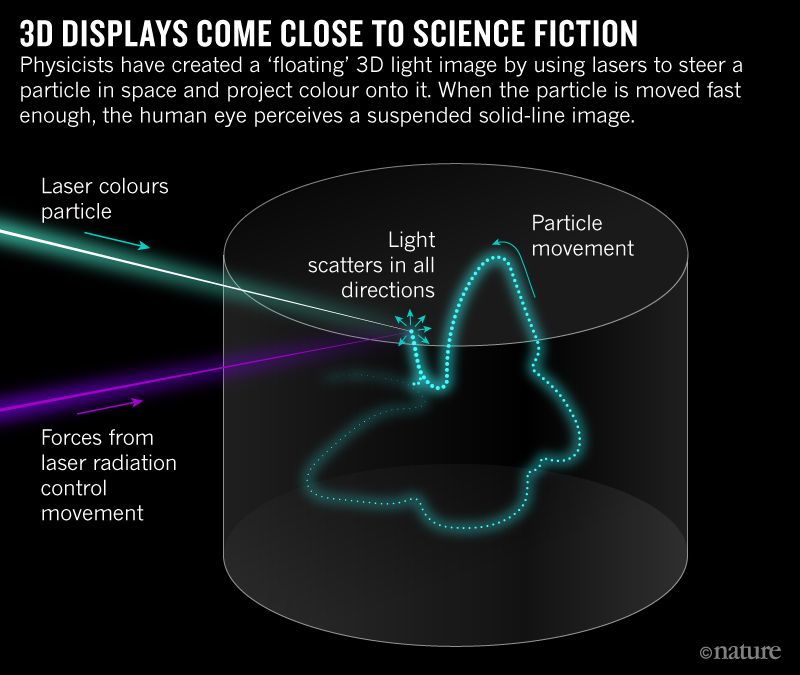 Who are its intended users?

The applications are vast as the concept can be used for medical purposes or military, or even as simple as an entertainment center or a method to communicate to see someone’s face. For medicine it could model skeletal structures or internals using some sort of imaging technology like a body scan of a patient in order to diagnose them easier. In the same vein of taking a scan, mining operations could benefit of 3D models representing an actual cavern system and the paths that have been taken or yet to be taken, along with marking areas that should not be mapped due to safety concerns. Then people who do a lot of 3D modeling will benefit from this hardware as it would be easier to model with a representative version of their work in front of them that they can look around in 3D and not just in their computers 3D model viewer. The applications can be expanded to schools or other avenues of education as getting an up-close 3D visualization of an object is much more insightful and useful to learning than a static 2D image. And if a 2D picture is worth a thousand words then a 3D image must be worth at least 1 Dimensional worth more. Currently the Looking Glass is leaning more towards 3D content creators so people who make a lot of 3D models, they will benefit greatly as animations could be previewed on this hardware, and it currently has Vimeo integration for the general audience that doesn’t create as much but just wants to enjoy content. While Voxon has a volumetric display arcade cabinet called the Z3D that people can enjoy games and create on with Unity or low-level C programming so developers can create games on it. 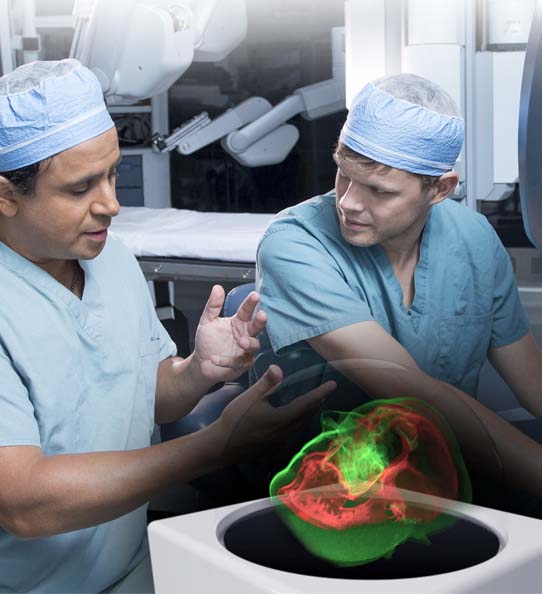 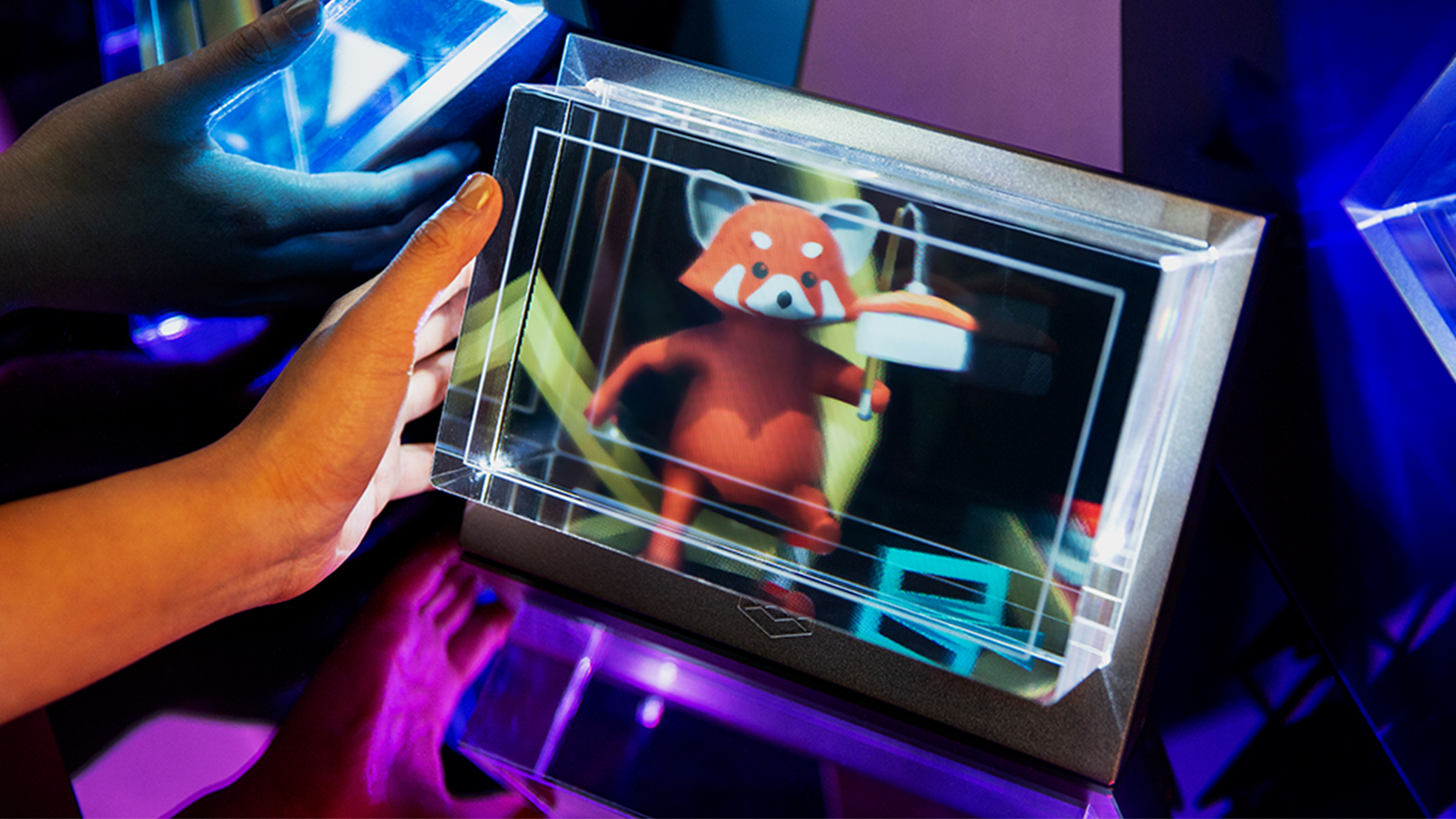 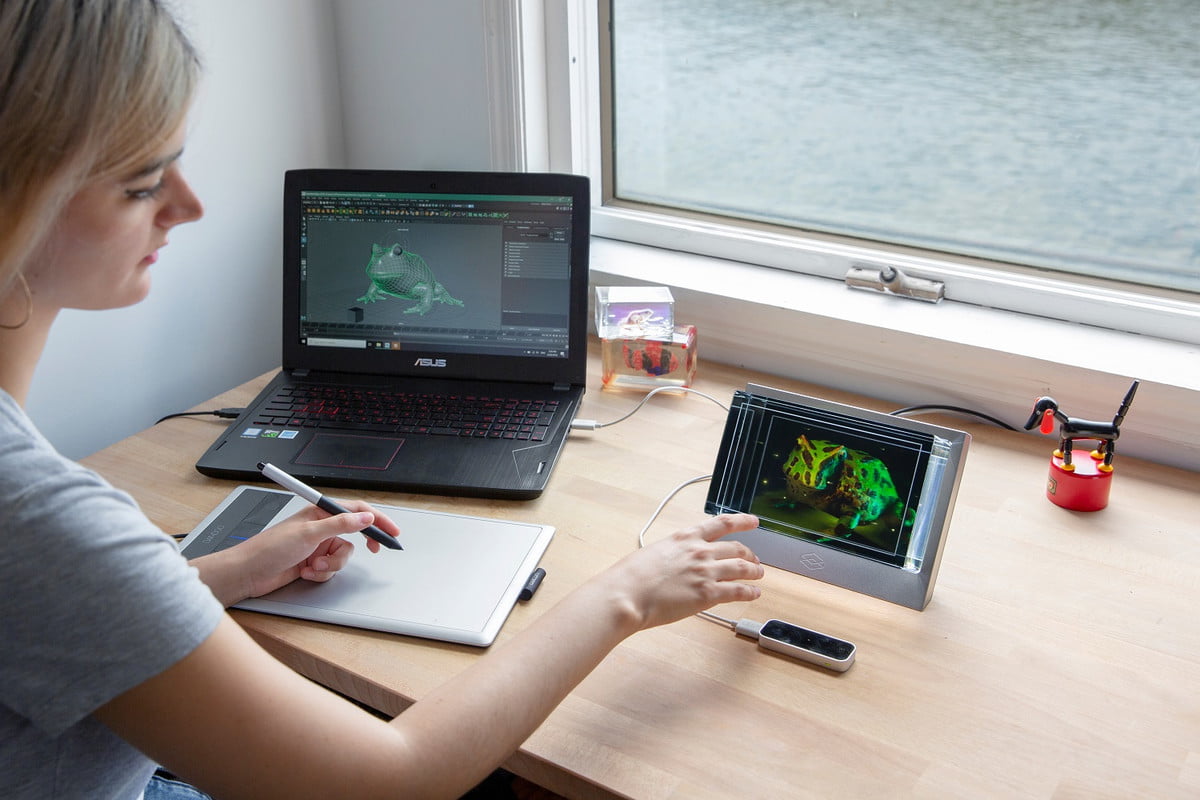 How is it created?

A true volumetric display renders a digital representation of a real object in a physical space ( volume ), the resulting "image" displays similar characteristics to a real world object enabling an observer to view it from any direction, focus a camera on a specific detail and see perspective meaning parts of the image closer to the viewer will appear bigger than parts that are further away.[4] This can be done with swept-volume displays, static-volume displays, or free-space displays. First up, swept-volume displays work by taking small slices of a space that can be rectangular or disc shaped and illuminating them with LEDs, projections or other methods of lighting and with the persistence of human vision, we see a continuous stream of light. Then static volume displays use fog or other dust particle systems and shine light upon it in such a way that the light has a number of diffusing planes to shine upon. Finally, there are free-space displays that capture a particle and move the particle very quickly to create the illusion that there is an image. A subcategory of free-space display is the optical-trap display which the Brigham Young University scientists worked on operates by first confining a light-scattering particle in a nearly invisible optical trap. The trap is moved through space, dragging the trapped particle with it. The trapped particle is then illuminated with visible lasers to draw a 3-D image by persistence of vision. The prototype scans particles at roughly 1 to 2 m/s to form very small (1 cm3) video-rate images. These small images can be full-color and possess image definition up to 1600 dpi. Researchers hope to greatly increase the size of images in future prototypes by using multiple particles simultaneously.[6] The Looking Glass is a combination of light-field which is a vector function that describes the amount of light flowing in every direction through every point in space [5] and the use of swept-volume displays. 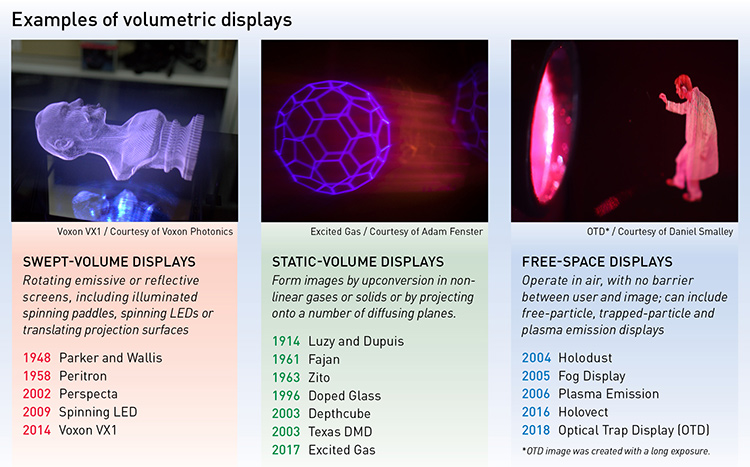 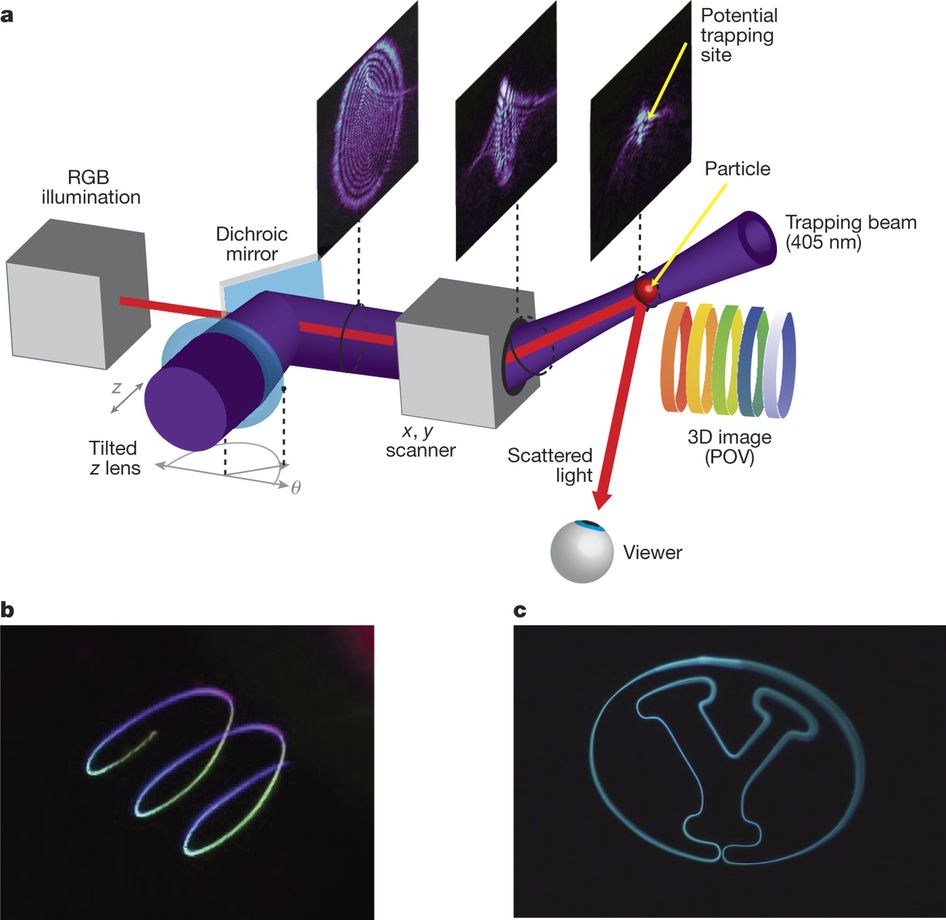 What are the issues with it?

Some of the issues with this is that the image either needs to be contained inside of an enclosure to contain the working lights and the refresh rate is capped at 30 or 60 depending on the production and company that made it. One other consideration is the very large amount of bandwidth required to feed imagery to a volumetric display. For example, a standard 24 bits per pixel, 1024×768 resolution, flat/2D display requires about 135 MB/s to be sent to the display hardware to sustain 60 frames per second, whereas a 24 bits per voxel, 1024×768×1024 (1024 "pixel layers" in the Z axis) volumetric display would need to send about three orders of magnitude more (135 GB/s) to the display hardware to sustain 60 volumes per second.[4] If the system is particle based then it can only display smaller images due to only having a single particle being manipulated. The latest system can already create images in higher resolution than a conventional computer screen — up to 1,600 dots per inch. But to create realistic pictures, with complex moving images and larger visualizations, physicists will need to find ways to speed up the movement of the particles and to control several of them at once.[1] And for the Looking Glass the pixel resolution limit is 4 million pixels while the larger version is capped at 8 million. For even pixel heavy creations, it might not be enough. And the viewing angle is not a full 360 for the looking glass as it has only a 50-degree viewing angle. For the other two examples they do have a 360 view but less visual acuity than the Looking Glass.

What is the future for this technology? 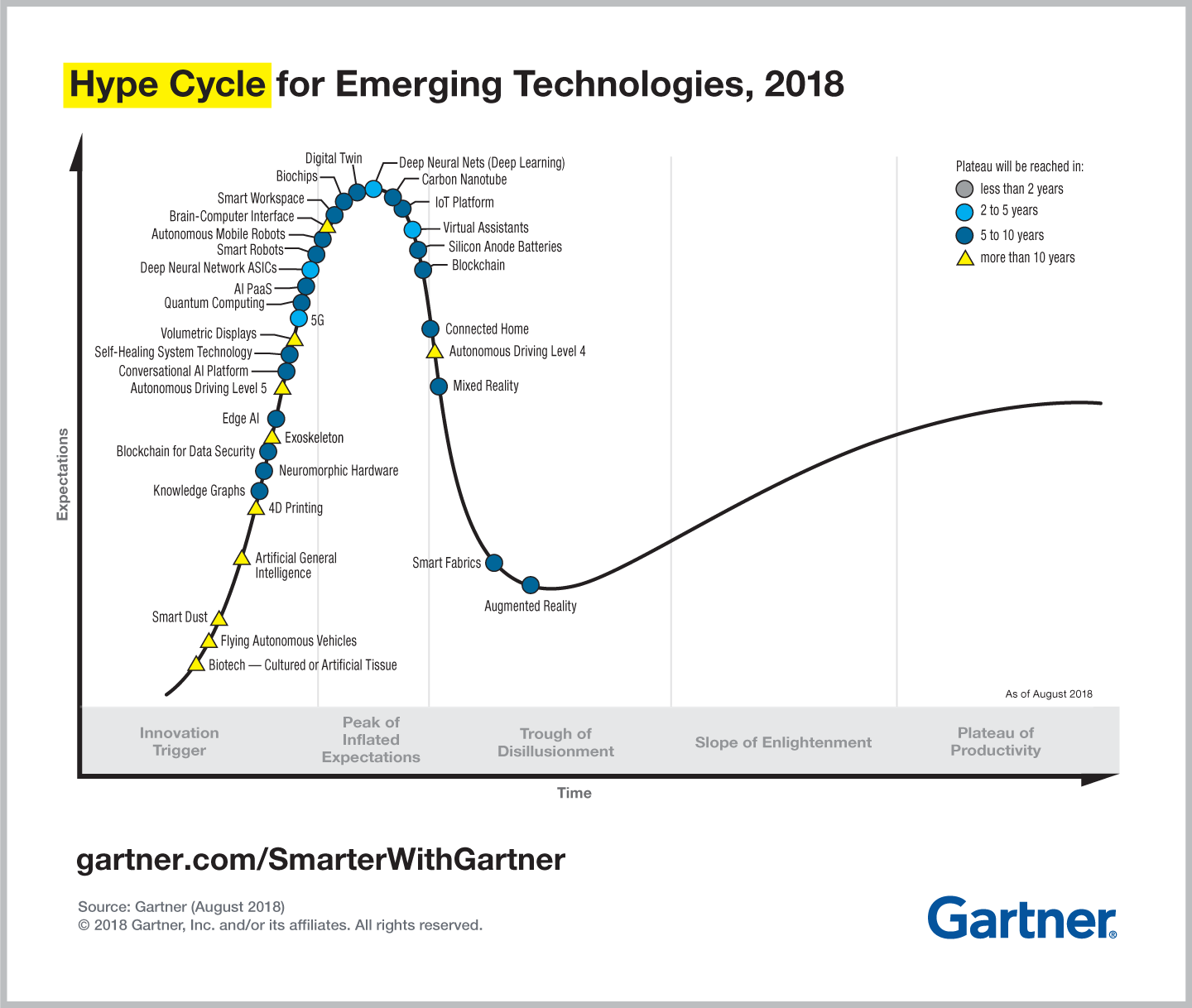 Currently there are no killer apps for Volumetric Displays that would force everyone to go out and get one so it is still very niche in application but in time if the advances keep moving along there could definitely be a market for Volumetric Displays that the general populace takes part in. If the scientists at Brigham Young University can make advances in their optical-trap display, then a whole new avenue of possibilities open up including but not limited to viewer specific imagery. But if the Hype cycle for emerging technologies is approximately accurate it will be around 2029 for the plateau to be reached on this topic as it is still in its innovation trigger stage. So, until that day comes, all we can do is Attendre, et Espérer: Wait, and Hope.

Reviews of other hardware: